The plant fungi partnership is one where plants routinely trade 20-30% of their sugar production to the mycorrhizal fungi in their roots. Are they getting their sugar's worth of benefits?

As gardeners we often equate fungi with plant disease - smut, rust, blight, powdery mildew, fusarium wilt, etc. In fact our first impulse in the plant fungi equation might be to look for fungicide. However, back in the root zone the plants are cheerfully supporting a fungal growth albeit of a different kind.

Studying the plant fungi relationship is challenging and expensive. We will likely never know exactly how this symbiosis works, however, scientists have documented some of the benefits of mycorrhizae. As well they have put forward some theories as to other complex areas where this plant fungi combo functions.

What Do Mycorrhizal Fungi Do?

When plants work their income could be measured as sugar. Plants trade fungi 20-30% of their sugar income, and in some cases even more, for whatever it is that the mycorrhizal fungi are selling. That's like a mortgage payment.

However, it does seem to be worth the fee, as plants are healthier and final harvests larger where this plant fungi dynamic duo are doing their thing. What exactly are the plants getting out of this?

When mycorrhizae form they increase the surface area of the root by 10 to 1000 fold. Microscopically thin threadlike structures called hyphae extend from the root out into the soil. This increases the volume of soil and soil nutrients the plant has access to.

They are most important in bringing phosphorus to the plant in usable form. Phosphorus, along with zinc, copper, calcium, magnesium, iron and manganese, don't move much in the soil and/or combine with other elements into compounds that the plants can not use directly. Mycorrhizal fungi exude acids that are able to break down rock, or elements that have become tightly bound in the soil, and bring those minerals back to the plant in a form the plants are able to use.

Phosphorus is often the limiting factor for plant growth and MF makes even low phosphorus soils plant friendly. Here is a short video shorting how mycorrhizal fungi help plants access phosphorus. Essentially the other hard to get elements like zinc, copper, iron, calcium, magnesium and manganese would get to our plant in much the same way.

Without the help of this group of fungi you'll either be adding fertilizers for elements that are likely already present in the soil, or be driving yourself crazy trying to adjust the soil pH so that said elements become more available to the plant.

Having higher phosphorus, zinc, copper, iron and manganese available for plants to use also has the side effect of improving the overall nutrition of the food produced.

The nitrogen fixing bacteria, rhizobia, needs a lot of phosphorus to do the job of fixing nitrogen. However, the roots of the legumes on which these bacteria live and work are coarse and not especially skilled at extracting nutrients such as phosphorus. Ensuring presence of mycorrhizal fungi greatly increases both the fixed nitrogen and the phosphorus availability in the soil. 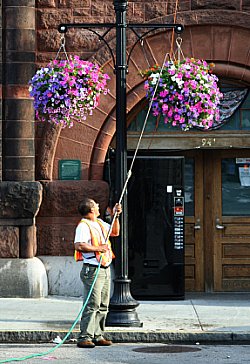 The diameter of the fungi hyphae are microscopic so they are able to harvest water from soil pores too small for plants roots to enter. This, along with the increased nutrition, greatly increases a plants ability to survive a dry period without watering. As watering restrictions become more common mycorrhizal fungi can be part of a healthy solution.

The flower basket is a notorious guzzlers of both water and fertilizer. In a testimonial on the mycorrhizae.com website. Grants Pass, Oregon tells a story. They treated 185 flower baskets with mycorrhizal inoculant. Despite one of the hottest summers on record not only were the flowers larger and more colorful than ever, but the town was also able to decrease water by 18% and fertilizer by an enormous 78%.

A second story on the same site talks about a trial in a grape vine nursery. 2000 plants were given the mycorrhizal treatment and 2000 were a control. Disaster struck when a power outage during an extended holiday meant temperatures too high for life and no water at all. All 4000 vines looked like a blow torch maniac had been let loose. The trial continued in spite of this. After several weeks of normal water and cooling the inoculated plants were all green again while the others were now definitely dead.

Use of these fungi when restoring sites is becoming more popular. Often restoration occurs in remote areas where watering is impossible. The plant fungi partnership tends to vastly improve the stands that establish.

Plants with mycorrhizae are more disease resistant. The fungi seem to affect the types of soil organisms that grow in the root zone or rhizosphere, encouraging the good guys and discouraging the bad. This sets up an army of organisms prepared to defend the plant. as well, some of the mycorrhizae actually form a protective sheath around the root preventing disease from entering.

Theories as to why this works include Maybe the plant fungi form a protective barrier against pathogens, produce antibiotic compounds that suppress pathogens, compete with pathogen for nutrients, or activation of the host plant's defense mechanisms.

Glomalin - Super Glue for the Soil and a Carbon Sink

Glomalin is a super sticky substance which is produced only by the arbuscular mycorrhizal fungi, the plant fungi partnering with 90% of plants worldwide. 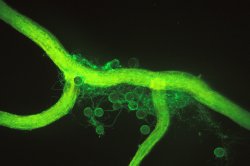 In this photo the round spores and threadlike fungi are covered with the green stained glomalin.

Glomalin glues or aggregates soil particles together increasing the pores, making air, water and roots more able to move through the soil. This also makes the soil resistant to wind and water erosion and gives soil its elusive quality known as tilth.

Glomalin coats the surface of fungal spores and hyphae. In fact it may be that glomalin is what the mycorrhizae use to seal the hyphae so they are able to transport nutrients in their pipeline like hyphae.

Hyphae live a few days to a few weeks before new growth in fresh roots takes over. The glomalin is then shed into the surrounding soil where is stays for anywhere from 7 to 42 years depending on conditions.

It was only discovered in 1996. This is large part because it is hard to separate from the soil. In order to release the molecules from the soil you need to treat it with citrate and cook it for an hour or more at 250 F, 120 C.

Glomalin is 30 to 40% carbon and makes up 27% of soil carbon stores. Humic acid, once thought to be the major source of carbon in soils, holds only about 8% of carbon reserves.

Plants send as much as 80% of the sugars they produce down to the roots. Not all of this ends up with the mycorrhizae. It supports the vast, diverse population of soil organisms in the area around the roots.

However, there is evidence that suggests that there is a multi directional transfer of nutrients between plants. This transfer is brokered by fungi so that for example an alder can give nutrients to say Douglas firs, or mature trees, able to reach sunlight, can transfer nutrients to seedlings on the forest floor.