Nitrogen fixing bacteria are nature's main method of changing nitrogen to plant available forms. It occurs underground in a very friendly symbiotic relationship of legume plant with Rhizobium types of bacteria. So Nature's nitrogen factory could look something like this lupine field in Glacier National Park.

It's only been in the last century that man was even able to make synthetic nitrogen fertilizer using a process developed by Fritz Haber. To manage that we need to create super high temperatures and pressures in large fertilizer plants such as the one at Severnside in the UK shown here. 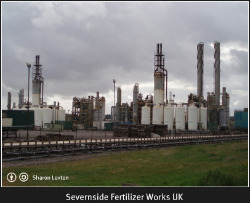 Recent research at the Center for Ecology and Evolutionary Biology at the University of Oregon by Dr. Jennifer Fox, found that agrichemicals such as synthetic nitrogen fertilzers and pesticides, interfere with the communication between plants and nitrogen fixing bacteria. The result is less nitrogen is fixed by the bacteria and of course more synthetic nitrogen is needed to maintain yields. YIKES! another vicious cycle.

Ancient farmers wouldn't have known about nitrogen fixing bacteria, but they did know that growing legumes yielded good food and helped other crops grow. In fact, of the eight Neolithic founder crops - the first plants domesticated by man - four were legumes and included lentils, peas, chickpeas, and bitter vetch.

These bacteria colonize the roots of their preferred plant partner. From their homes in the plant roots they take nitrogen from the air and convert it into ammonia, a form of nitrogen that plants can use. For this valuable service the legumes feed the bacteria a steady diet of plant sugars. 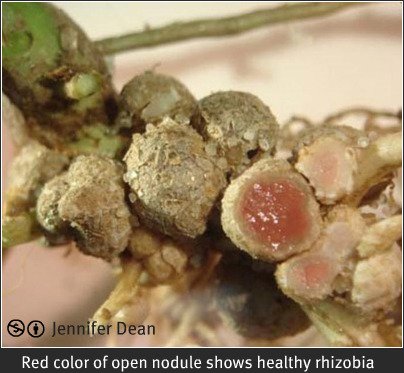 Your soil may already have several varieties of rhizobia present that live on from year to year. Pull up a bean plant and check it for white or pinkish white nodules on the roots.

I just did this myself in the community garden plot where I grow vegetables. The whole garden here is regularly rototilled at both the beginning and end of the season. Unfortunately, while this looks neat, tidy and ready to plant, it really does a number on the soil life. The bean plant roots didn't have a single nodule.

While you will still get a crop from the seed you sow both soil and crop are improved if the right nitrogen fixing bacteria are present in the soil.

It's worth using a legume inoculant in the following cases:

How to Use Legume Inoculants 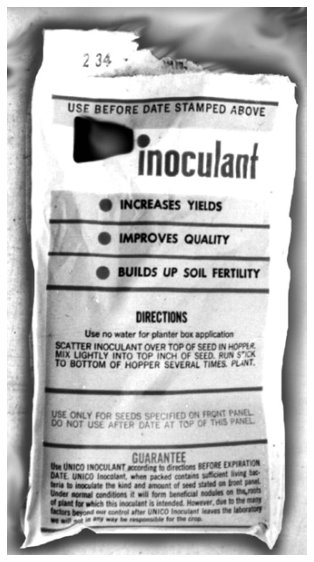 Often garden stores stock an inexpensive inoculant containing several types of nitrogen fixing bacteria. This mix most often contains the bacterium strains for peas and beans and will work well for them. However, if you are planting peanuts for example it won't work for them.

It's Alive - But Not Forever

- The powder containing the nitrogen fixing bacteria is a live product. It has an expiry date and needs to be stored properly to ensure it is viable. If in doubt get a fresh batch.

- Moisten the seed with either a little water or milk. Add the powder to the seed and mix thoroughly so that the seed is completely covered.

- You can't use too much of the rhizobacteria, but you can use too little, so pile it on.

Maybe You've Got 'em, Maybe Not

- Once you have a specific nitrogen fixing bacteria in the soil it may be present for future crops. But you must plant its host regularly so the bacterium have a place to live. Otherwise they will eventually die out. It's probably worth inoculating every year to be sure.

Won't My Compost Supply the Nitrogen Fixing Bacteria I Need?

In a word No. This is one of the rare situations where compost isn't going to help.

Your compost pile is a home for decomposer bacteria and fungi. The decomposers can circulate and help maintain plant available nitrogen in your garden. But they can not take nitrogen from the air and turn it into fertilizer.

Rhizobium, the nitrogen fixing bacteria equipped to do that, need live hosts. If the legume along with its bacteria partner have not grown in the soil before it doesn't matter how much compost you add it's not going to put that microbe in your garden.

If you have green plants you likely have some  sort of nitrogen fixing bacteria at work. We think it's all about legumes but it turns out that it's just that those Rhizobium bacteria are some of the few types of bacteria kind enough to survive lab conditions.

Now that we have relatively cheap gene sequencing available researchers are finding that many types of bacteria living in the soil have the gene for fixing nitrogen.

Actinomycetes are another group of bacteria. These ones are more famous for giving us many of our antibiotics, but one group of them is an important nitrogen fixing bacteria.

The Haber Process brings us synthetic nitrogen fertilizer. It's said to feed a third of the world but it has some big downsides.