Mycorrhizal Fungi and the Plant Kingdom
A Love Story 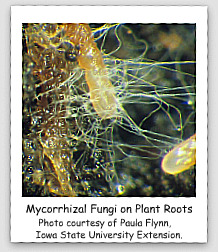 Mycorrhizal Fungi were first reported in the world of science in 1885 but they've been partnering with plants ever since plants first ventured from the ocean onto land.

The word mycorrhiza literally means fungus (myco) root (rhiza). It refers to the combination of fungus and root. The plural form is mycorrhizae or mycorrhizas. Mycorrhizal fungi refers to the fungus part of the mutualism or symbiotic relationship.

Fossils dating back 400 million years show evidence of mycorrhiza formation. Mycorrhizas are among the most important symbiotic relationships plants make. These partnerships are an intimate contact resulting in synchronized plant-fungus development. Between 90 and 95% of all plants form mycorrhizae.

Personally I'm appalled that somehow I missed the whole mycorrhizal fungi connection despite spending over 30 years gardening and 20 years heading a seed company. These partnerships are amazing. They increase the effective area of the root by a factor of 10 to 1000 thereby greatly increasing the availability of nutrients to the plant. And that's just the tip of the iceberg of benefits these fungi impart to their plant partners and the environment they grow in.

Truffles Anyone? How Mycorrhizae Came to a Scientist's Attention

Back in 1881 Professor A.B. Frank was commissioned by the German government to find a way to increase the harvest of the prized and uber expensive fungi known as truffles. Truffles always grow in association with certain trees, in this case oak and beech.

While Professor Frank never did figure out how to increase truffle production, he did observe that the roots of the trees where truffles were found were always encased in fungi and molds. However, the relationship was clearly not causing any harm to the beech and oak trees infected. Rather they remained healthy and vigorous.

Frank published a paper on these observations where he put forward the theory that this relationship was mutually beneficial to plant and fungus. He believed the association aided in the absorption of nutrients and water.

The theory caused an uproar. At the time fungi were always viewed as bad for plants. His Main opponent, Hartig, believed the mycorrhizal fungi were parasites to the trees. However, Frank's theory has stood the test of time. In fact we no longer question whether the fungi are beneficial, we now explore many of the ways these allies are helping plants.

Female pigs are used to locate ripe truffles. The truffle smells like the sex hormone put out by boars (male pigs) so the sow (female pigs) find them easily. Unfortunately, given the smallest chance they also eat the truffles they find. This can be a financial disaster.

Larger truffles are actually auctioned off. The record price paid was set in December 2007 when Stanley Ho paid US$330,000 for white truffle weighing 1.5 kg. (3.3 lbs.). This truffle was discovered by Luciano Savini and his dog Akin. Truffle dogs are now more common. They do need to be trained but are easier to work with and willing to part with their truffle treasures for a dog treat.

Pines are not native to Puerto Rico, however, back in the 1930's various attempts, all unsuccessful, were made to grow a pine forest on the island.

The pine tree seed would germinate well and the seedlings quickly grew to a height of 8 - 10 cm or 4 inches. A short while later they withered and died. Various attempts were made to help them survive long enough to establish on the island. In particular phosphorus fertilizer was added to the soil but they still collapsed.

In 1955 someone had the brilliant idea of bringing some of the soil from under a pine stand in a similar climate - North Carolina. This soil was incorporated into the soil surrounding 32 of the struggling seedlings. A second set of 32 was left alone as a control. A year later the plants with the Carolina soil were a meter and a half (about 5 feet) tall. Most of the others were dead. They discovered that mycorrhizal fungi had colonized the healthy pines.

More trials ensued with both surface soil containing the fungi and with fungi grown in a peat based medium. Always inoculated seedlings were more vigorous and larger than non mycorrhizal seedlings.

More than 15 years later the mycorrhizal pines were still growing strong and naturally sporulating or reproducing in the pine plantations.

Faced with an eroded beach sand is often dredged from offshore and planted with native grasses to slow erosion and build the sand dunes.

The problem is that neither the sand nor nursery stock have mycorrhizae yet in natural dunes the grasses have a variety of mycorrhizal fungi partners. A series of tests were made (Sylvia, 1989) to discover the effects of the fungi.

In the nursery, despite fertilizer and pesticide use they managed to get a moderate level of fungal colonization of test plants. Two sets of similar sized plants were transplanted to the dunes. Twenty months later the colonized plants had 219% more shoot dry mass, 81% more root growth and were 64% taller.

In 1981, The Rodale Institute Farming Systems Trial® (FST) began what has become the longest running side-by-side comparison of organic and conventional farming systems in the US.

In 1989 Dr. David Douds, a soil microbiologist with the USDA, began a study of mycorrhizae at the Rodale facility. By 2003 a number of trials on pepper and potato crops were reported In New Farm.

"We had some plants that were inoculated with a control mix with no inoculum, another one inoculated with a mix of mycorrhizal fungi, and another inoculated with just one species commonly present in commercial inoculum," Douds explains. "We transplanted them into the Compost Utilization Trial,"--another ongoing experiment at The Rodale Institute--"and we found over the course of the 3-year experiment that the mixture of mycorrhizal fungi increased the yield of marketable-sized peppers up to a maximum of 34% over the control. Last year we tried inoculating potatoes, and we got up to a 50% increase over the controls."